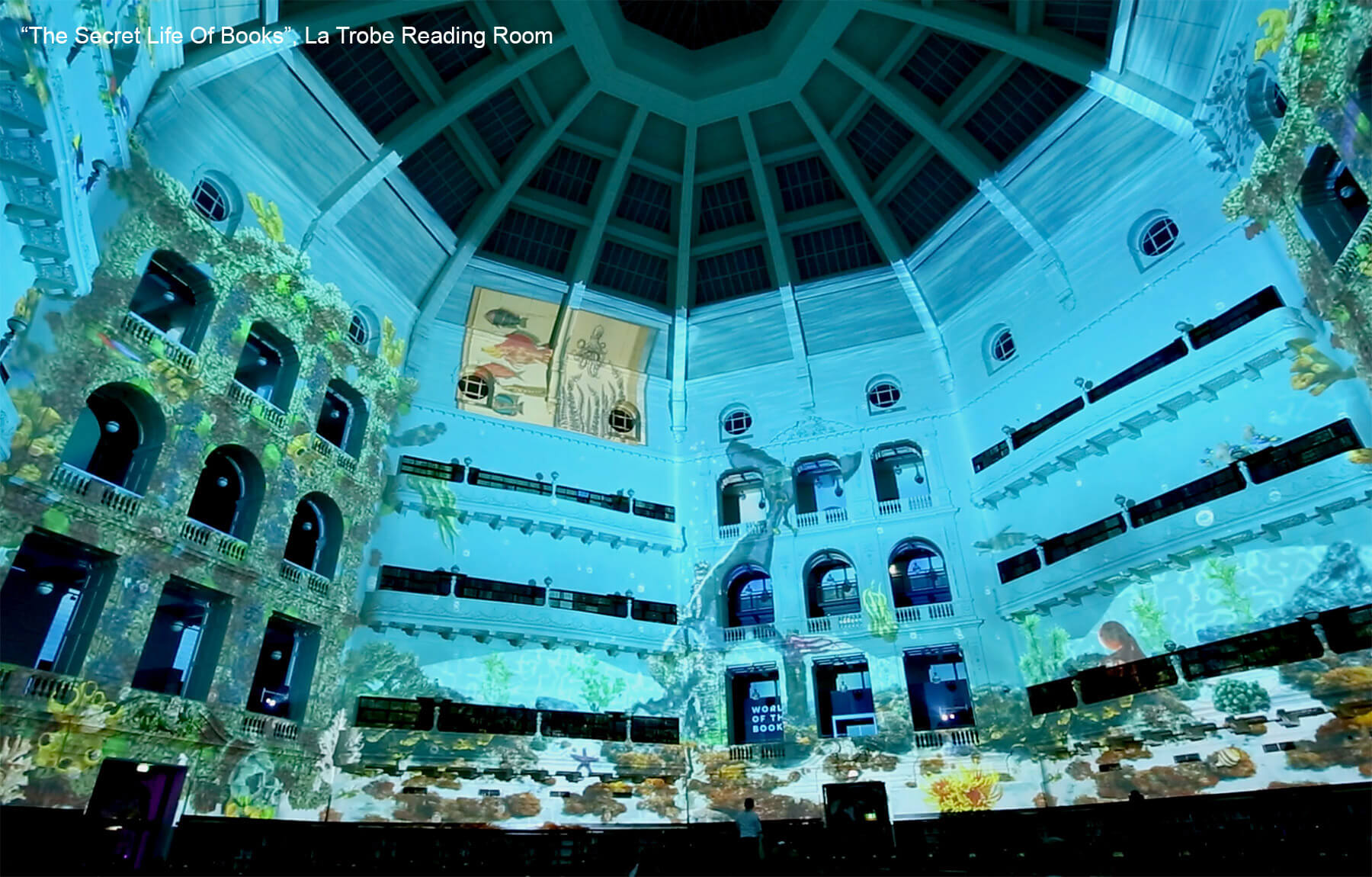 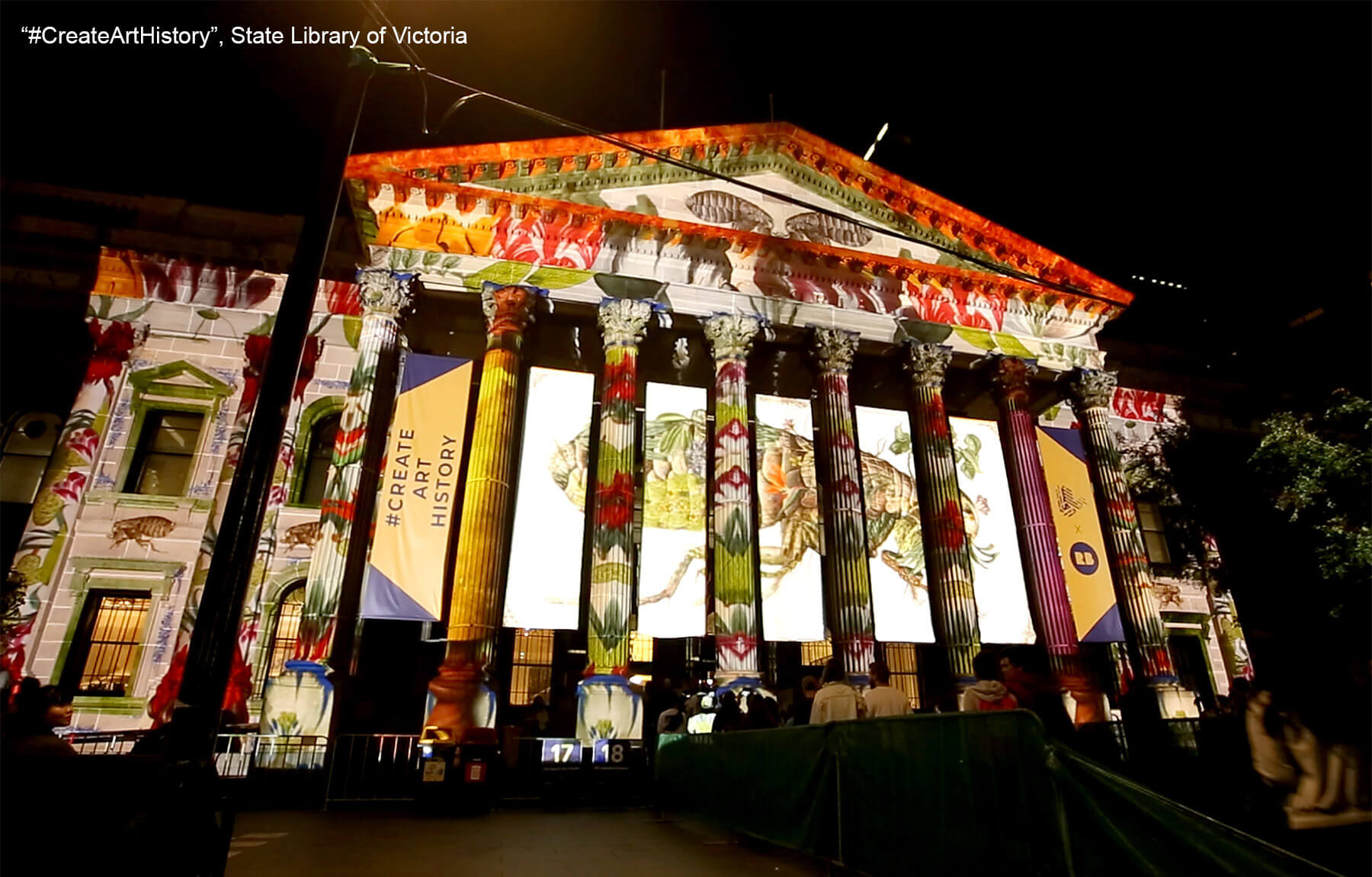 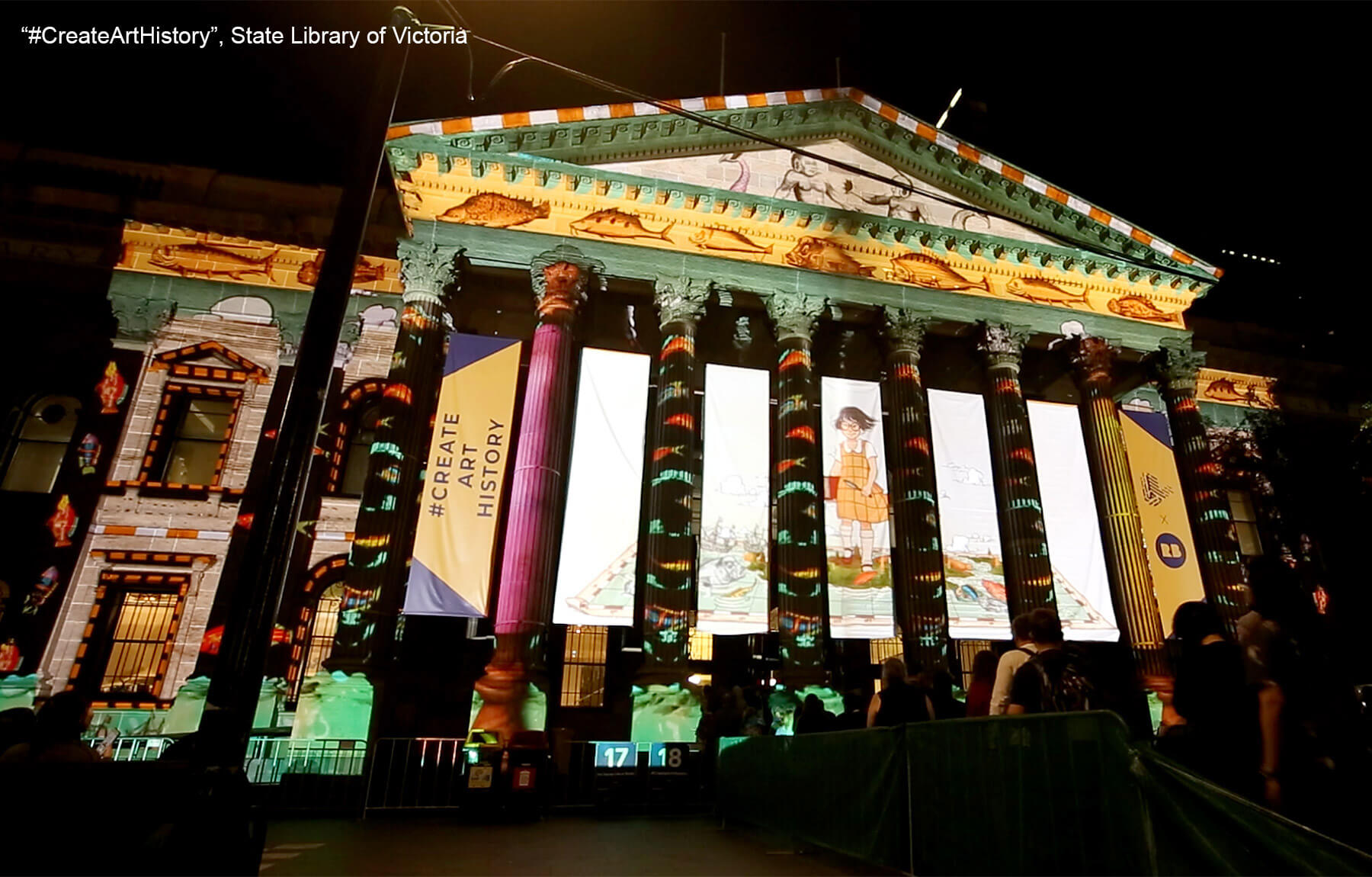 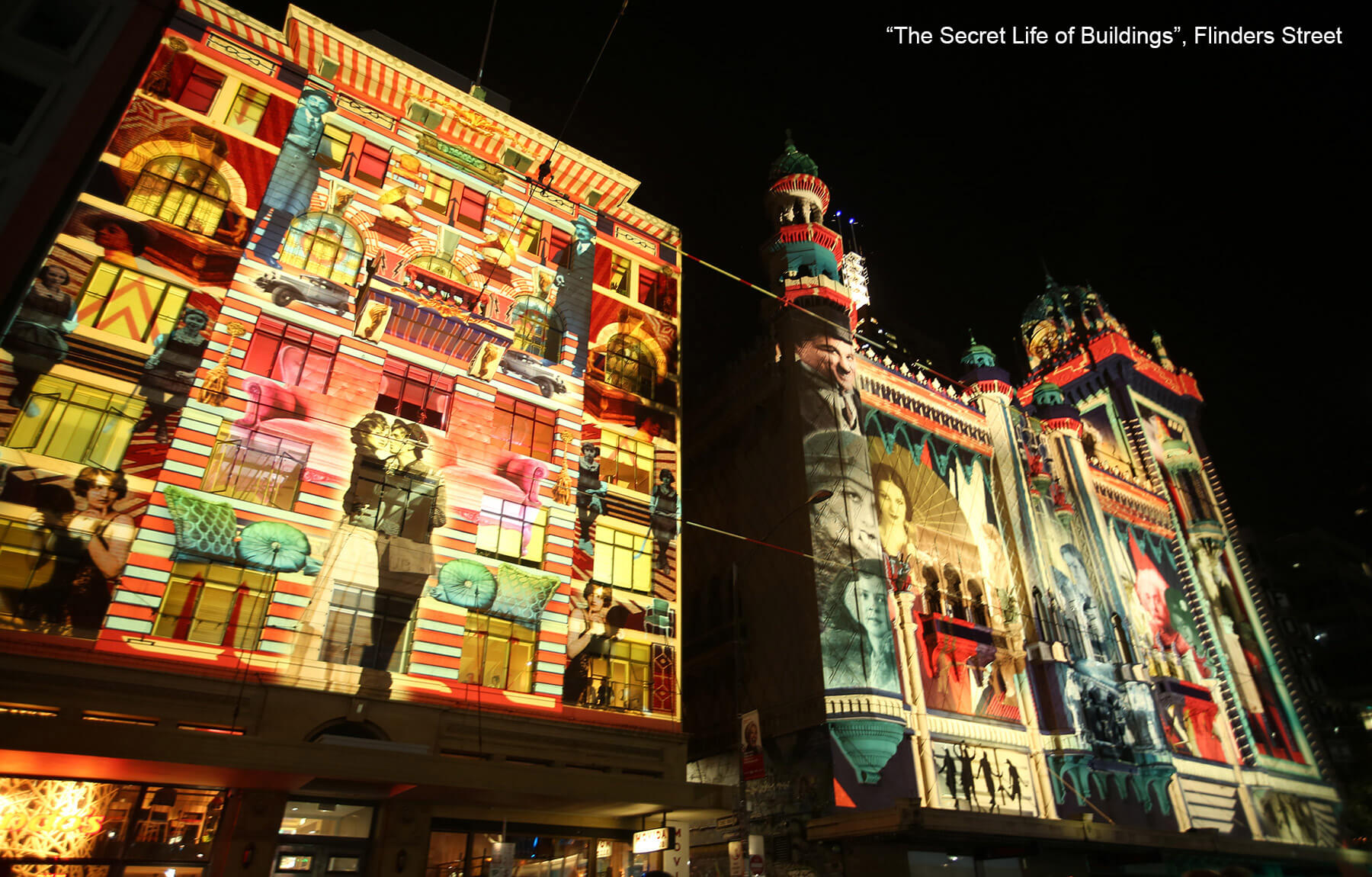 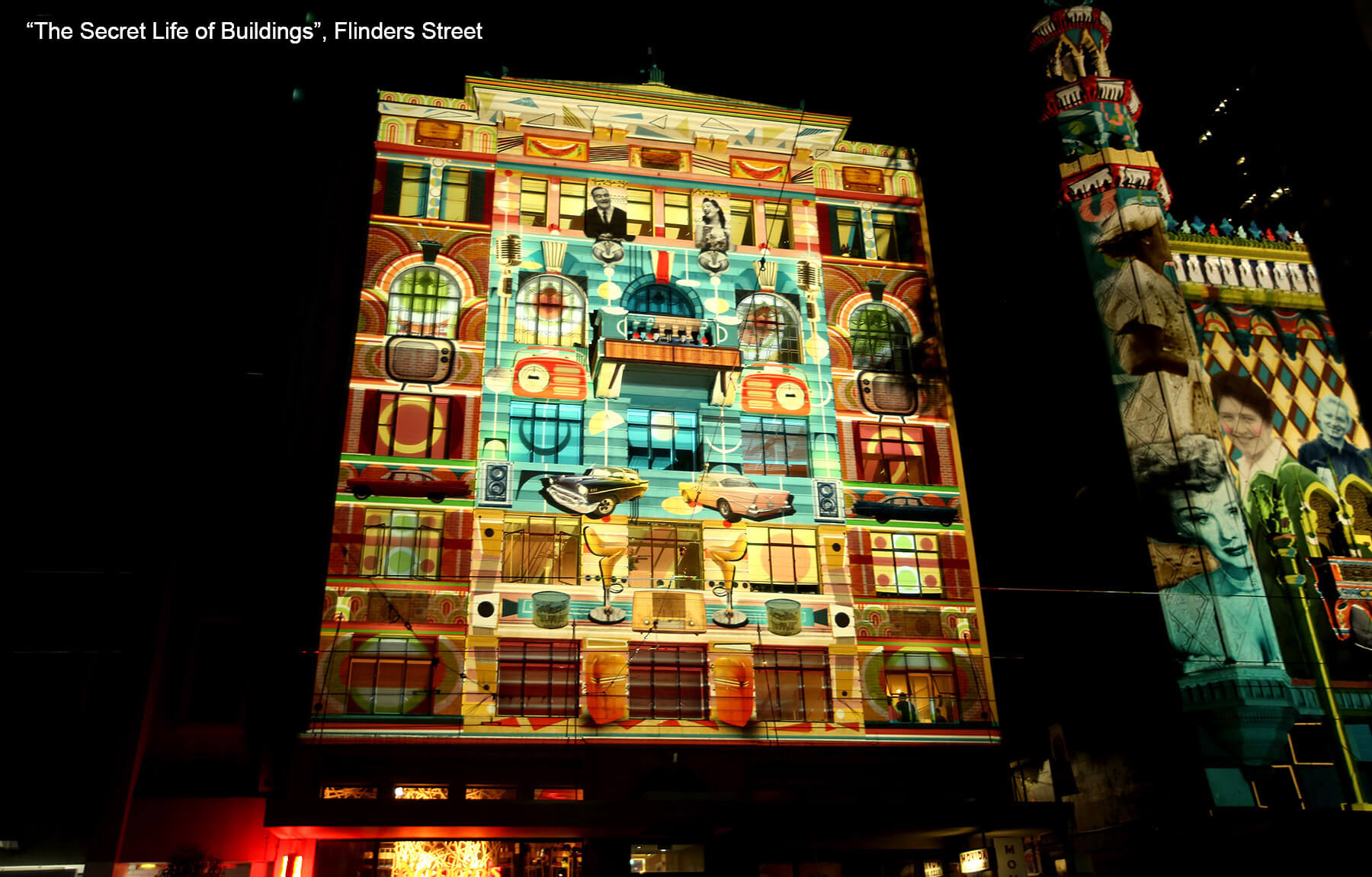 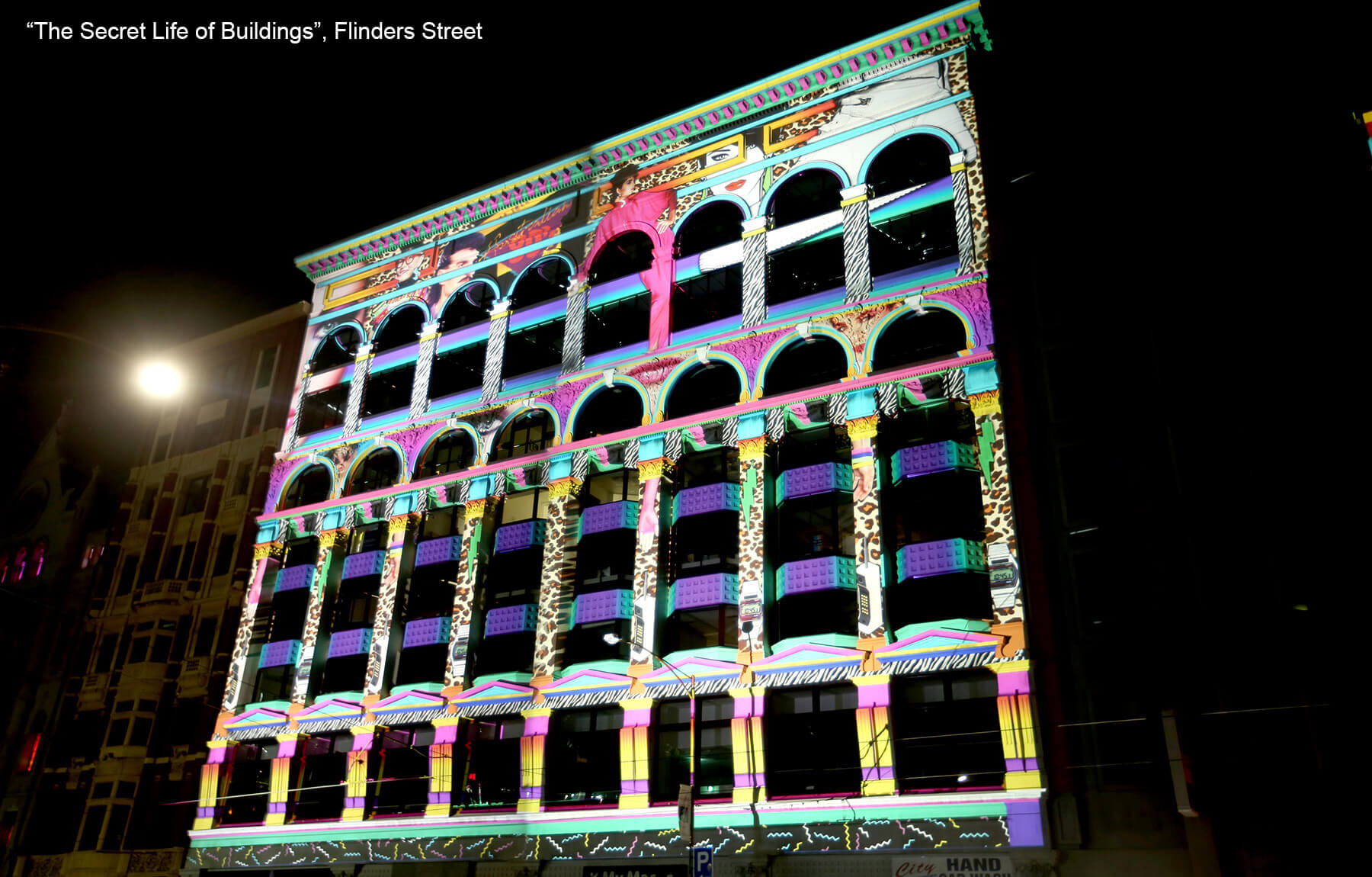 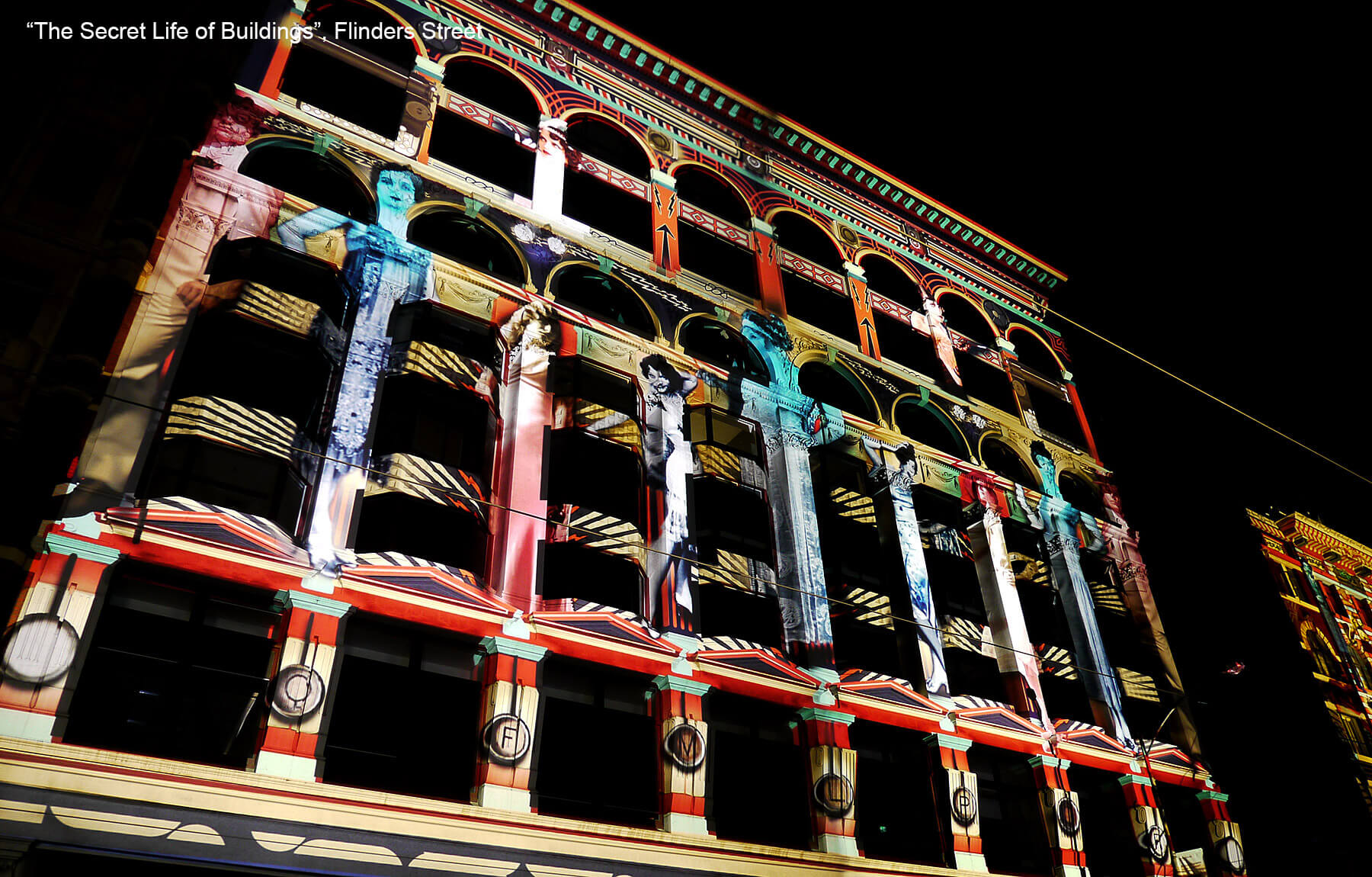 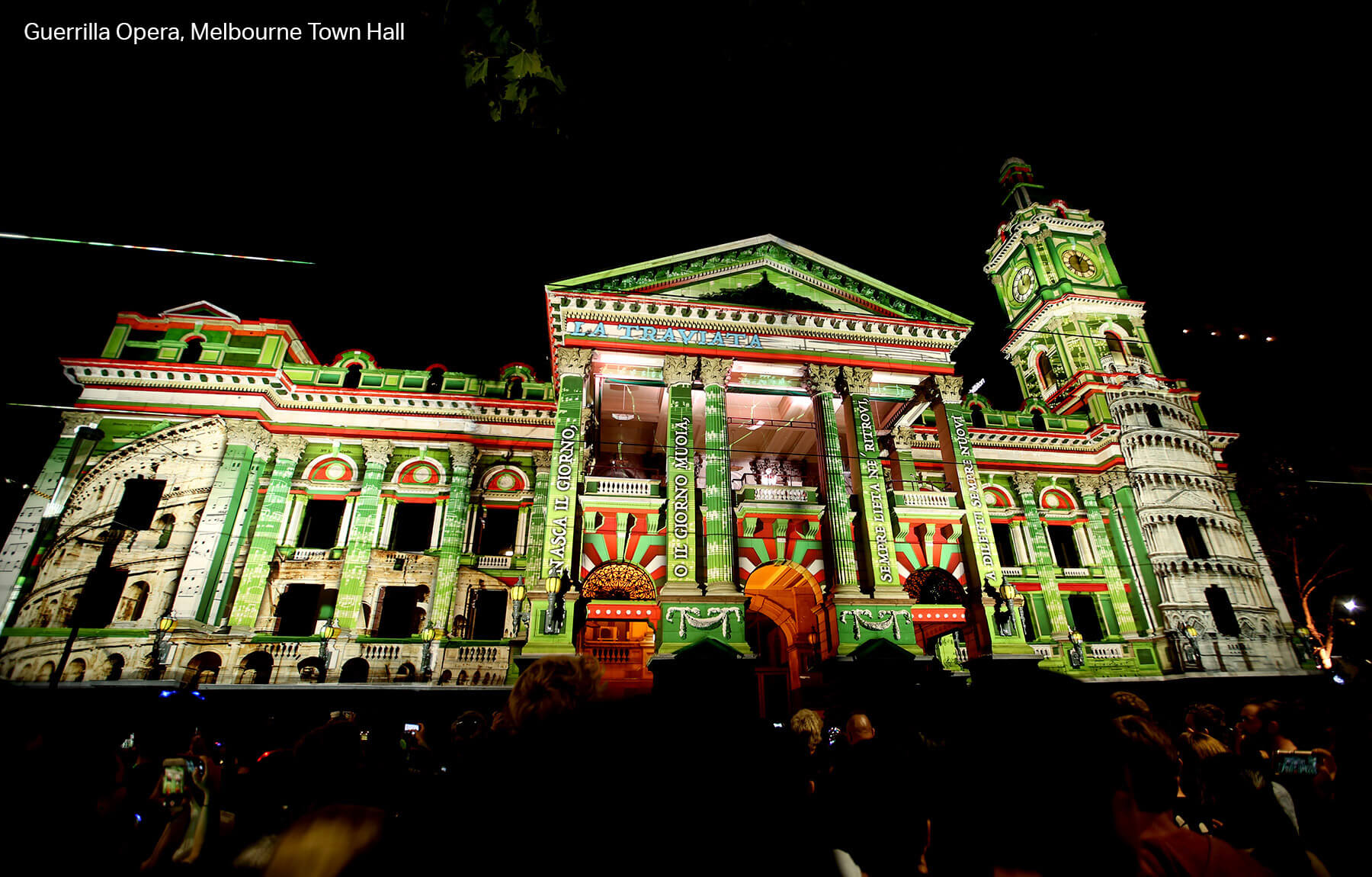 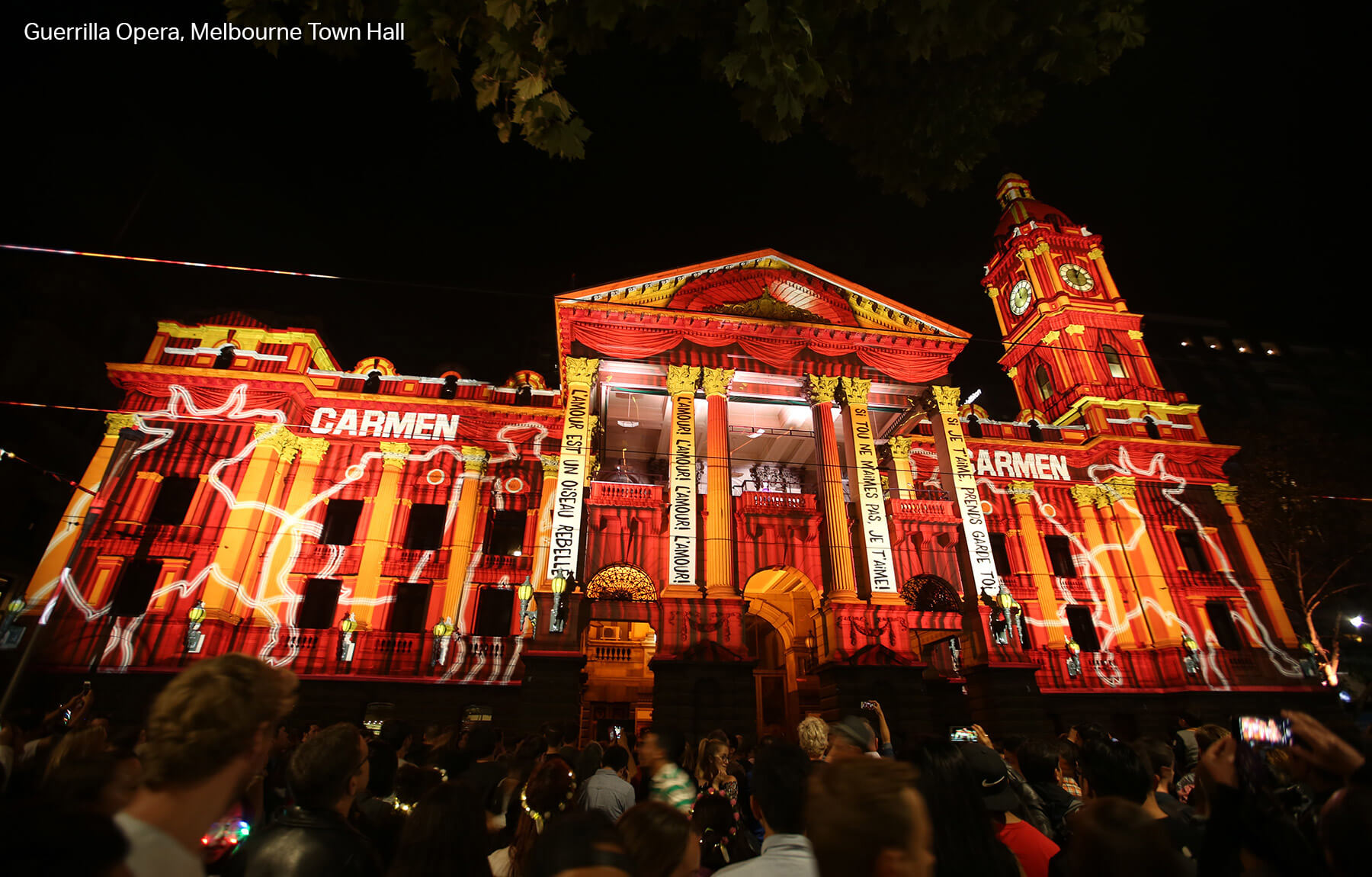 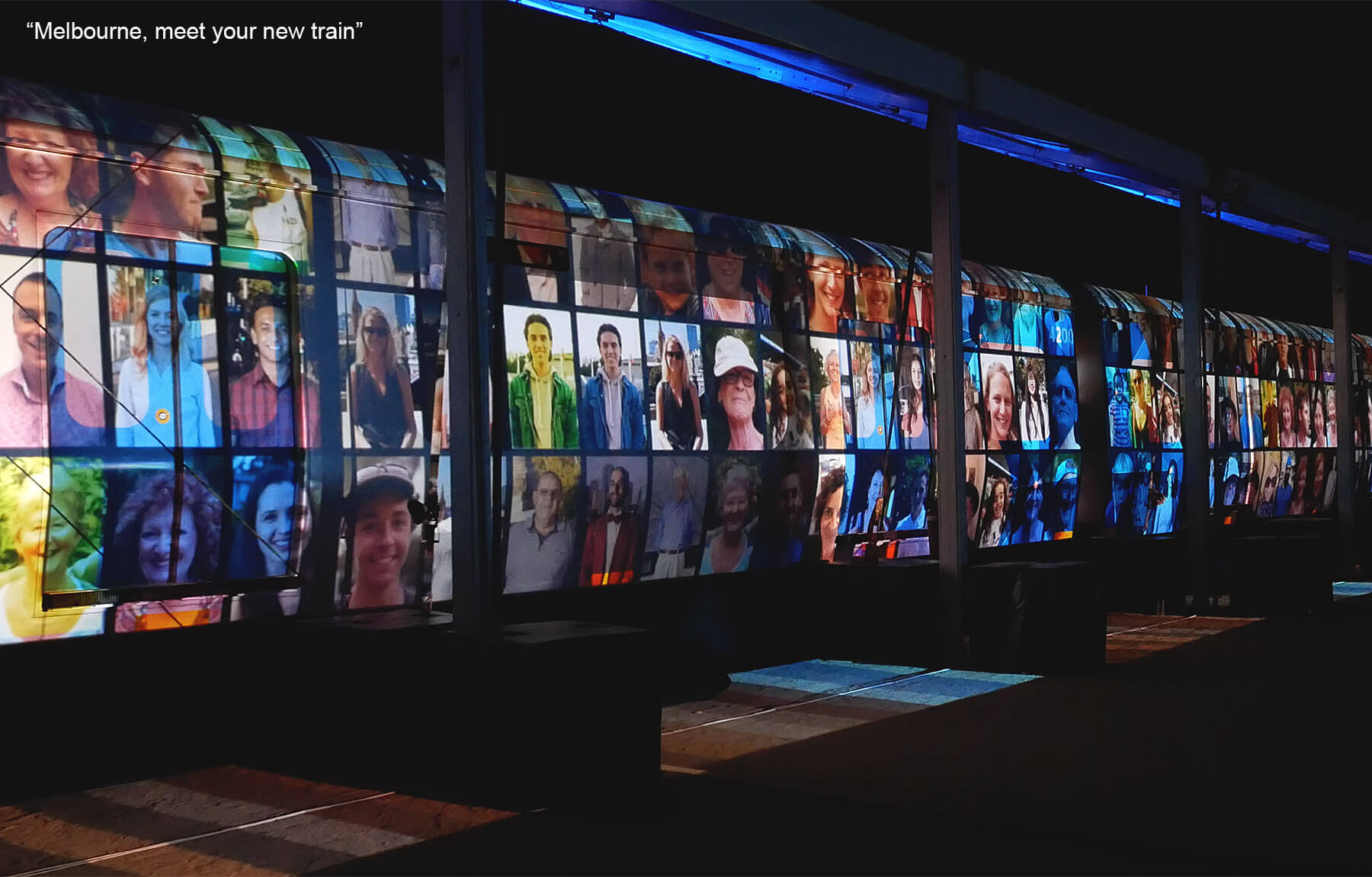 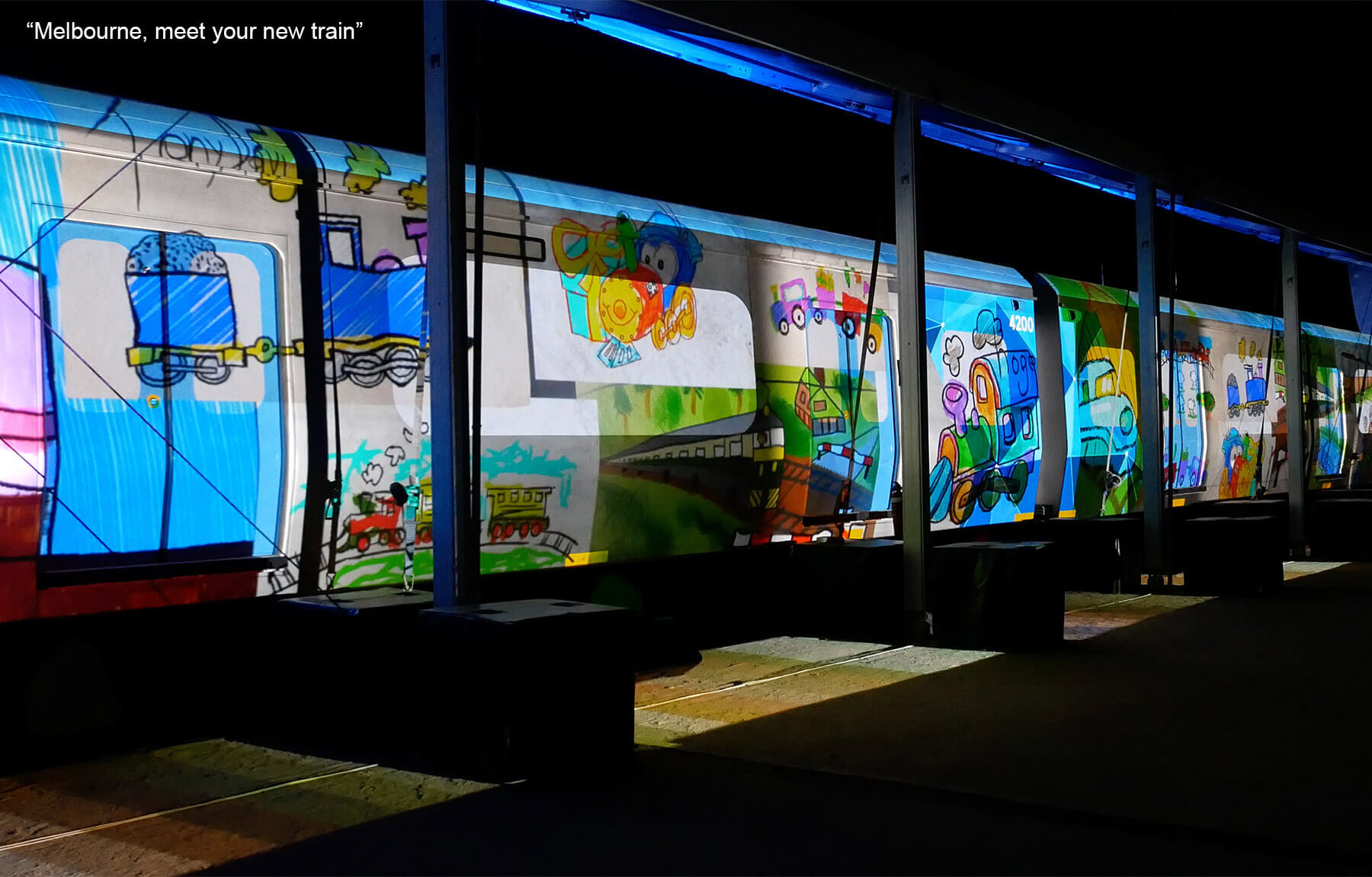 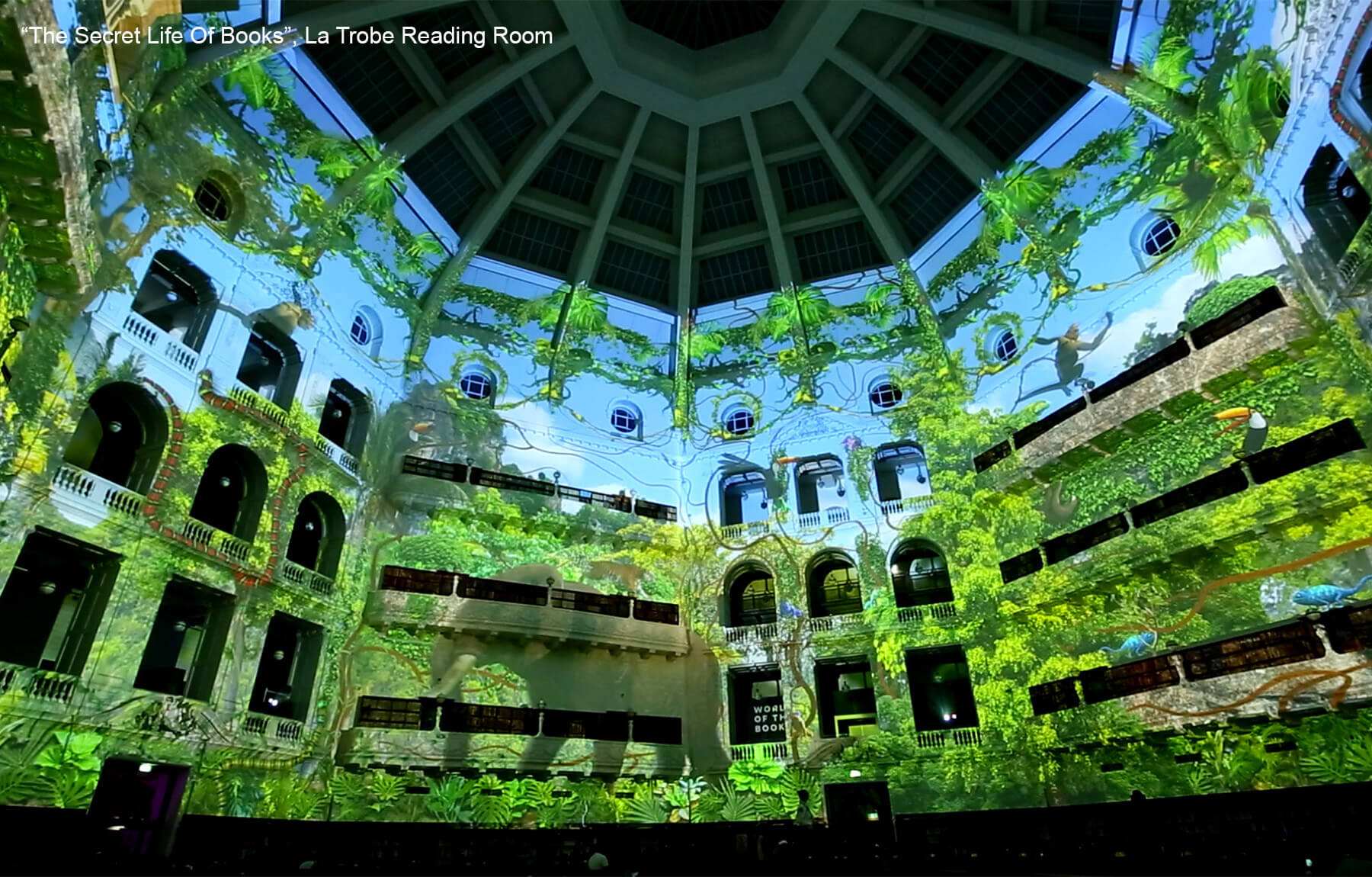 White Night Melbourne 2018 attracted more than 600,000 visitors to the streets of the city centre. Creative Director, David Atkins, engaged The Electric Canvas to design and deliver seven major projection works for the all-night event, as well as provide the technical delivery for the Royal Exhibition Building projections.

“The Secret Life of Books” in the majestic La Trobe Reading Room of the State Library of Victoria was lauded as one of the event’s highlights. The Electric Canvas was commissioned to design an enchanting 3D animated digital projection set to an original soundtrack, based on David Atkins’ concept of what happens when the library closes its doors at night.

On the centre portico and flanks of the State Library’s façade, a digital projection entitled “#CreateArtHistory” celebrated the finalists and winning artists of its namesake competition.

Back by popular demand, the buildings of Flinders Street between Swanston and Russell Streets were the canvas to “The Secret Life of Buildings”. We utilised iconic images of fashion, transport, celebrities and news to create decade-centric treatments from the 1920s through to the 1990s.

In Birrarung Marr, Transport Victoria presented “Melbourne Meet Your New Train”, a digital projection by The Electric Canvas mapped to the outside of one of Melbourne’s new high-capacity trains.

Stretching across the 150m façade of the National Gallery of Victoria, we delivered a thought-provoking and inspiring digital projection co-produced by DAE Whith Night and Behind the Wire. The work featured selected films from the award-winning Immigration Museum exhibition, “They Cannot Take the Sky: Stories from Detention”.

Melbourne Town Hall was the site for Guerilla Opera, who performed a series of opera favourires from the portico. The Electric Canvas created PIGI projections onto the façade and clock tower of the Town Hall to complement arias from classics such as La Bohème, La Traviata, Carmen and The Merry Widow.

The event’s overarching theme of “What If?”, which was reinforced by projections of thought-provoking “What If…?” questions onto the entrance of Flinders Street Station. This theme was also the inspiration for the content produced for the REB by the artists of Limelight.